A trip report about a day hike to Wedgemount lake and Mt. Cook that I did on September 8th 2012.

This trip report was originally posted on the clubtread forums. I’m adding it here in case those forums ever disappear and also so it’s easier for me to find whenever I need reminding about how fit I used to be.

My friend and I did a day hike to Wedgemount lake and then on to Mt. Cook. This was our first time up at Wedgemount and we had both heard it was hard. We normally hike with a few others that are a good bit slower than the two of us so we were going to push this one to see how fast we could do it.

We left Vancouver a little after 5am. The Gran Fondo race was on on Saturday so lots of the highway was going to be closed from 6 am on. Managed to get away without too many delays. Just one detour off the highway around Horseshoe bay. It was then down to one lane for most of the way to Whistler so it took longer than usual.

Anyway got to the trail head around 7.30. About 10 or so cars already in the parking lot. Hit the trail for a bit before 8. It was definitely tough going. Passed a few others that were going camping. It’s a long slog up with a big back pack! 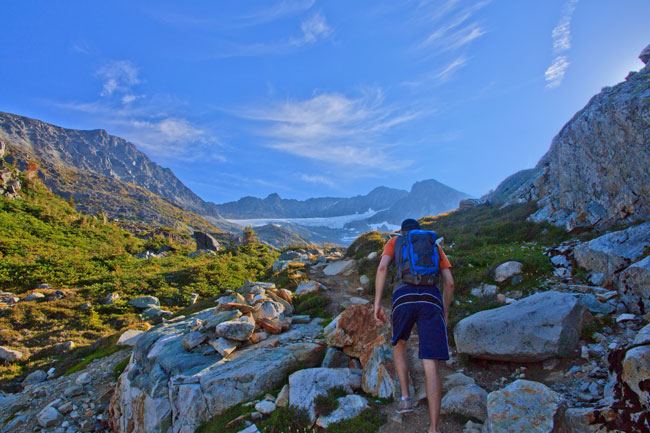 We made it to the lake in around 1 hour 50 minutes. Legs were definitely burning the whole way. There were only a few tents at the lake at that time so lots of free spots. 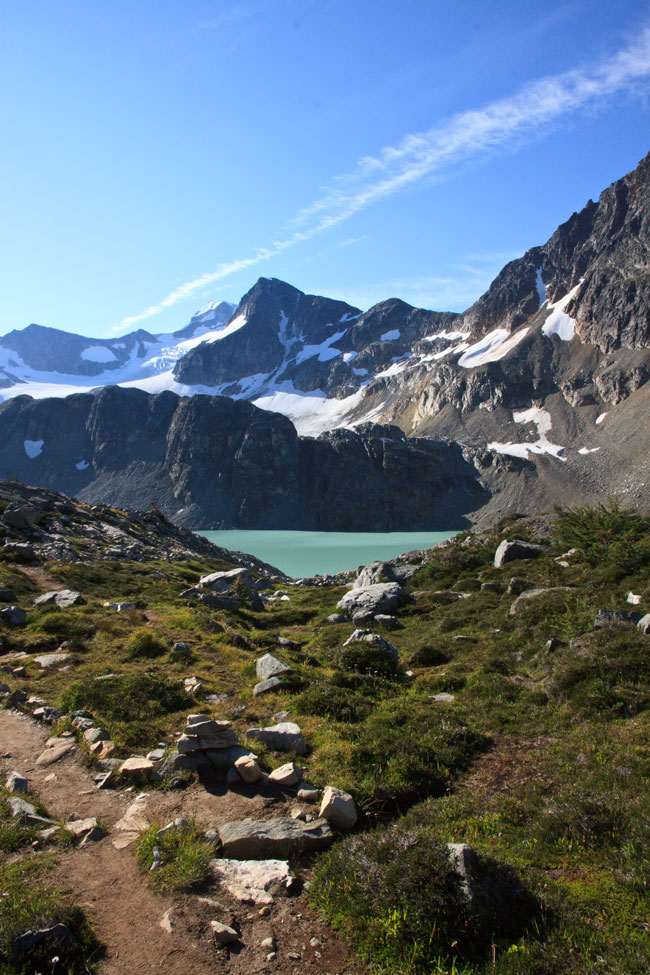 From reports I had read online the trip up to Mt. Cook takes 4 hours round trip. And its the easiest hike from Wedgemount. Easiest is relative here! I really didn’t think it was going to be as hard as it was. The first hour or so isn’t too bad. A bit of scrambling but mostly solid rock. 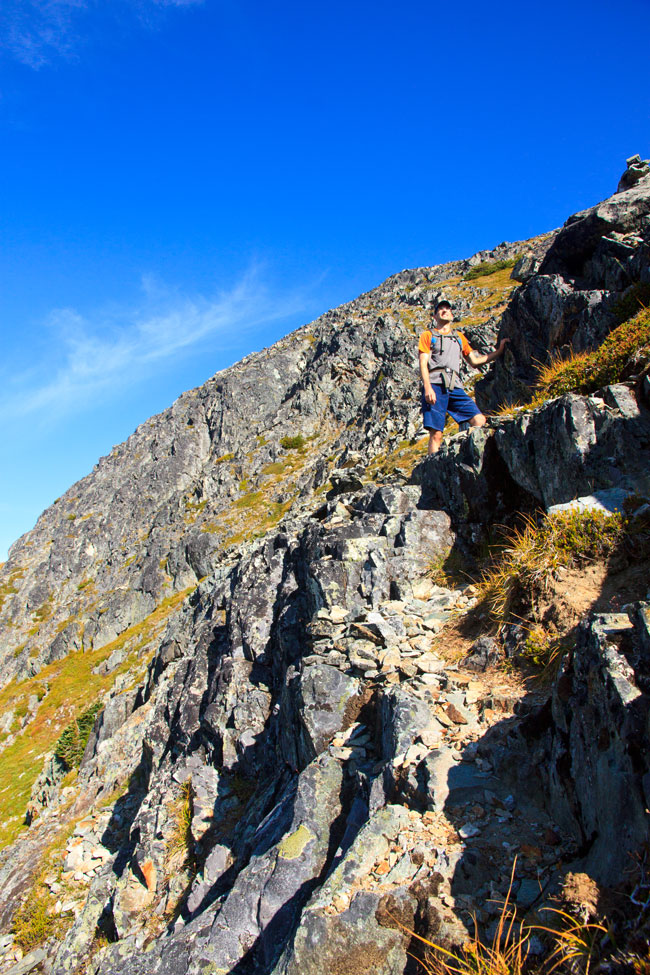 We were following cairns most of the way but then you meet the scree slope! 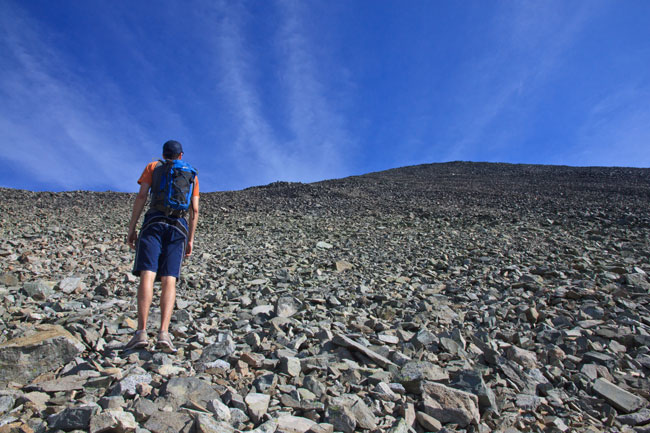 It goes on and on and on. It just never seems to end. We lost track of the cairns at this stage so I think we might have cut up a bit too early since we found it quite steep. Had to zig zag a bit to make it up. Had to take lots of breaks on the way up the slope. I think we had burnt our legs out from getting to the lake.

The only good part of it is the view when you turn around. Whistler pops out eventually and you can see all the way to the tusk as well. 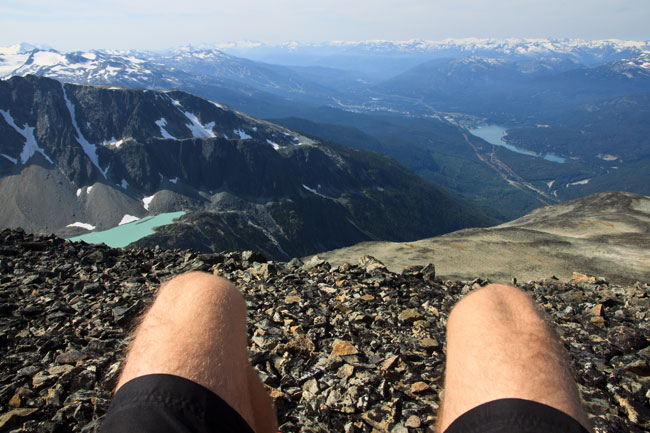 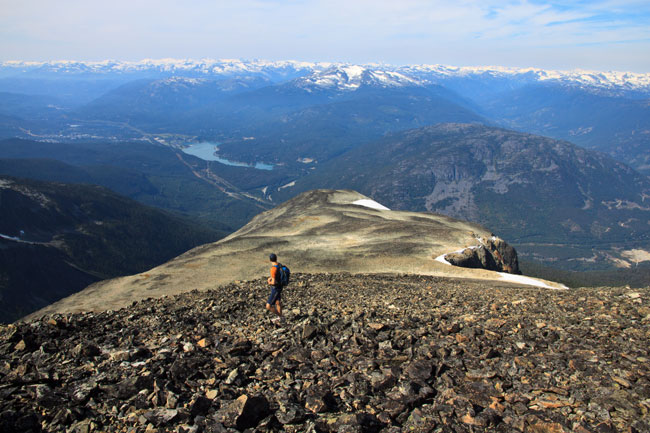 We eventually made it to what we thought was the top. 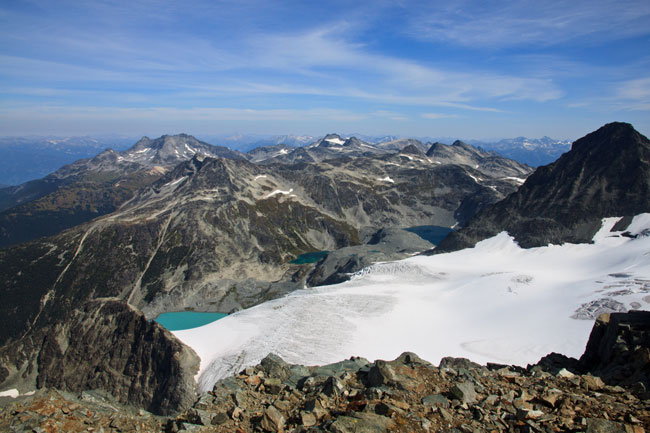 There were some cairns marking the spot we were standing but then you see another huge cairn off up even higher.The hiker we met earlier was making his way up to it so we headed off to follow him. From where we were it looked like we would have to cross the snow to get to it. When you make your way over closer you can see there is a narrow ridge you have to cross. It doesn’t look too bad in the picture but it feels fairly sketchy while you are crossing it. 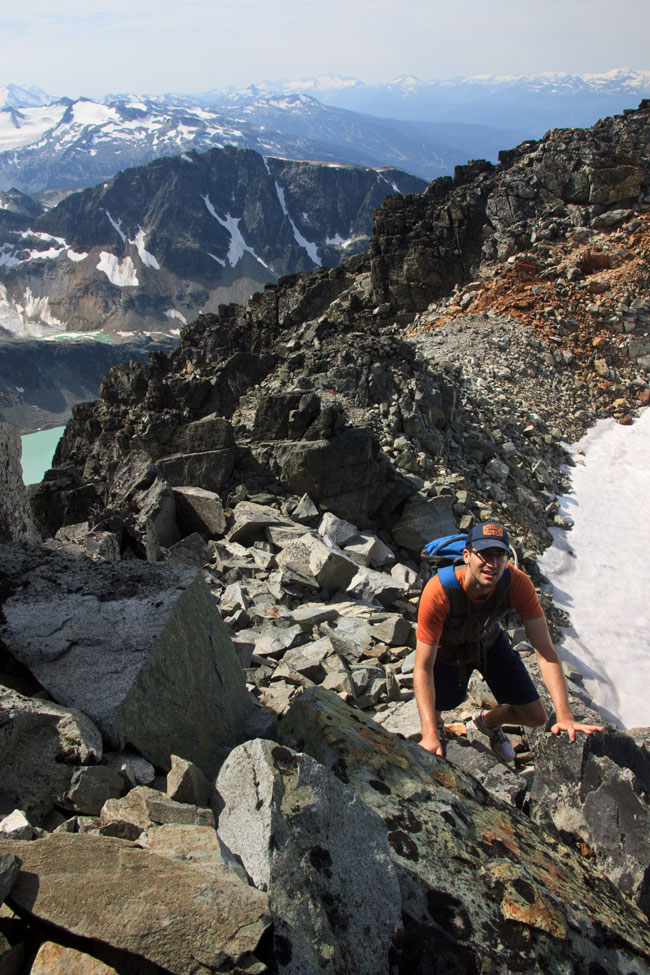 About 5 or 10 minutes later you are at the real top. The elevation at the top of Mt. Cook is 2676 meters 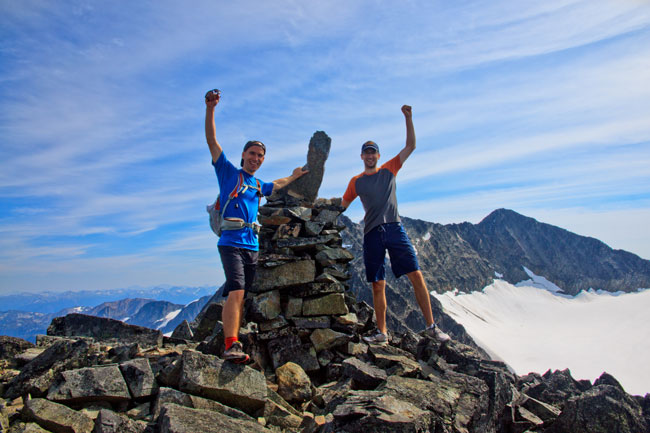 I think it took us about 2 and half hours to get up there. We took a well deserved rest for a half hour and then headed down.

Down was so much easier. I think we took a better route down. It only took about 40 minutes to get off the scree slope thankfully. The rest was pretty straight forward. Overall it took about 1 and 40 mins or so to get back to the hut at the lake. So overall it took us a bit longer than the suggested 4 hours up and down.

Just before the lake we met a couple heading up to Mt. Cook. There were camping at the lake and asking us about the hike up to Mt. Cook. It was around 3 o clock at this stage. We told them it would take at least 4 hours. They looked to only have a bottle of water between them. I wouldn’t fancy doing it without food and lots of water. Would be interested to know if they made it to the top or not.

Headed down to the lake for a nice swim after that. It was cold but felt so good. Swam (for a few seconds) in Joffre lake last year and that was much colder. Great to wash off the sweat and dust and take a rest. Spent about an hour around the lake. 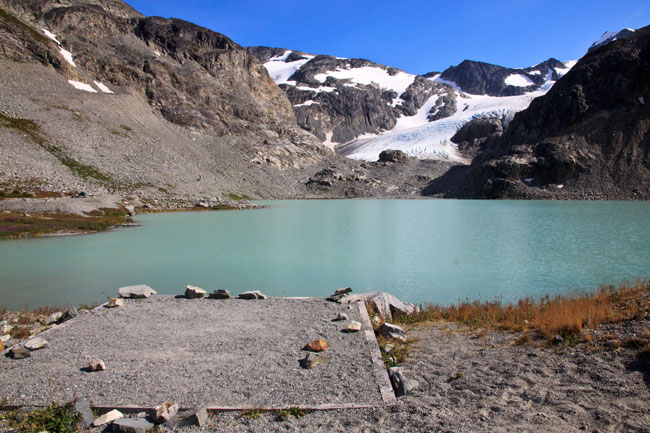 Previous: Brick Journey
Next: Git Commands I Use Every Day